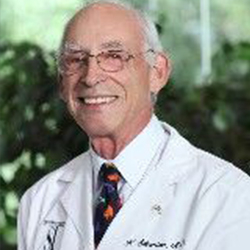 Herbert Silverstein, MD, FACS, President and Founder of the Silverstein Institute and the Ear Research Foundation, has consistently been recognized (since 1979) as one the “Best Physicians in the USA.” He has been a leader in Otology (science of the ear) for more than 25 years, developing surgical and diagnostic procedures, inventing instruments (such as the facial nerve monitor/stimulator), teaching medical students, residents and fellows, and helping people from all walks of life.

He is internationally regarded as a leading authority on Meniere’s disease, having received the Prosper Meniere’s Society’s prestigious Gold Medal Honor Award in 1996 for his contributions to understanding the biochemistry of Meniere’s disease and his surgical developments to treat the disease. He has developed a new procedure for otosclerosis the Laser STAMP (Laser Stapedotomy Minus Prosthesis), which does not require a prosthesis to restore the patients’ hearing, and many minimally invasive surgical techniques including the Silverstein MicroWick for treating inner ear disease through the ear canal.

Dr. Silverstein serves as a Clinical Professor of Surgery on the teaching faculty of the University of Pennsylvania Medical School and at the University of South Florida. He is Board Certified in Otolaryngology and is a Fellow of the American College of Surgeons. He is an active member of the American Otological Society, American Neurotology Society and the Triologic Society. He is on the active staff at Sarasota Memorial Hospital and Cape Surgery Center.

In 1979, Dr. Silverstein founded the Ear Research Foundation. Today, he serves as its president, as well as its Medical Director. An active researcher, Dr. Silverstein speaks at many annual international medical meetings and is the author of over 240 scientific papers, several textbooks, and videos. Among his many honors and accolades are the 2nd Howard P. House Award for Excellence in Ear Surgery, and the 10th Prosper Meniere Society Gold Medal Honor Award. He is one of 25 Otologists in America to be elected to the Best Doctors in the U.S.A. repeatedly since 1979. Other honors include President: Otosclerosis Study Group 1998, Guest of Honor: Canadian ENT Society 1999, Guest of Honor: The Triologic Society Southern Section 2002, Presidential Citation: American Academy of Otolaryngology 2002, Guest of Honor: Otosclerosis Study Group 2005, Award of Merit: American Otological Society 2006.

Register
Please complete the form below to Register.